There are plenty of romantic movies, so why not spend your honeymoon at theme parks centered around movie experiences? Universal Studios Florida and Islands of Adventure both offer a wide range of rides, shows, and dining experiences for you and your new spouse to enjoy as you celebrate your marriage. Whether you only spend one day at Universal Orlando Resort or make it a multi-day adventure, your honeymoon will be packed with fun.

When you’re planning to visit Universal Orlando Resort, you’ll want to choose the perfect accommodations for a romantic getaway. You’ll be busy all day at the theme parks, so you’ll want somewhere cozy and quiet at night. Consider renting a condo or vacation home for more privacy, peace and quiet as compared to a hotel. Universal Orlando Resort is located just off I-4, so there are plenty of vacation homes and condo resorts located within easy driving distance. The resorts typically have amenities like hot tubs in the pool area and spas that offer couples’ treatments to enhance your honeymoon, and many vacation homes have their own pools and spas for private playtime.

You do not want to spend your honeymoon in a noisy hotel, enjoy peace and quiet and still be only minutes from the park!

Special Experiences at the Theme Park

While you can have plenty of fun as regular guests, why not splurge on something special for your honeymoon? Universal Orlando Resort offers private VIP tours at both of its theme parks. There are group tours, too, but the private experience lets you and your spouse get the red carpet treatment wherever you choose. Go to the head of the line for all of your favorite rides, enjoy the shows, go behind the scenes, and have a romantic dinner at one of the parks’ full-service restaurants. It’s not cheap, but the memories it creates is priceless. Call 866-346-9350 for pricing and full details.

If you don’t want to go whole hog, you can still purchase Express Passes that allow you to use a special express line at most of the rides. The passes erase the stress of long waits and help enhance a happy honeymoon. 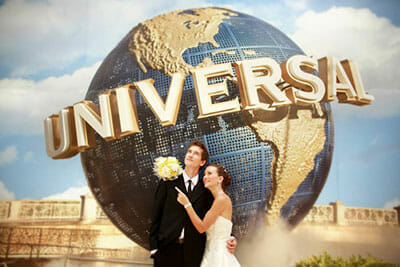 Both Universal Studios Florida and Islands of Adventure are packed with photo opportunities to help you fill up your honeymoon album. You can buy pictures taken by the park photographers or use your own camera to get shots with the characters and at various photo stops around the resort. Even though you’re in Orlando, your photos will reflect a variety of fun and exotic locations, from the Simpsons’ hometown of Springfield to Jurassic Park to London to Hogwarts Castle.

The two parks also have plenty of thrill rides where it’s perfectly acceptable for couples to cling to each other as King Kong attacks or the raft being pursued by dinosaurs heads for a perilous drop or you try to avoid the Mummy’s curse. You and your beloved can even indulge in a little friendly competition on Men In Black: Alien Attack. If things get a little heated over who gets the high score, you can always kiss and make up afterwards.

If you stick around until the end of the day at Universal Studios Florida, watch the Cinematic Spectacular show while snuggling together. It’s a whirlwind trip through a century of Universal movies, narrated by Morgan Freeman and set to a swelling soundtrack, with some romantic moments woven in among themes from Heroes to Horror.

Universal Studios Orlando has a reputation as being just a thrill park for teens, but there is so much more to offer that honeymooners can experience fine dining and fun shows.

CityWalk is the dining and entertainment area adjacent to Universal Studios Florida and Islands of Adventure. There’s no admission charge to visit this area, and it’s packed with restaurants and clubs that are perfect for honeymoon dining and partying. The theme parks have good restaurants, but the selection on CityWalk is expansive enough to accommodate any taste. Whether you’re in the mood for Mexican, sushi, burgers, Italian, or gourmet fare, you’ll find an eatery to fulfill it. You can even enjoy an eclectic chocolate factory atmosphere in the Toothsome Chocolate Emporium. Stay and play at the nightclubs into the wee hours of the night if you still have energy after a busy day at the theme parks. You can also get tickets for Blue Man Group, as their theater is adjacent to Universal Studios Florida, or catch a musical act the the Hard Rock Café.