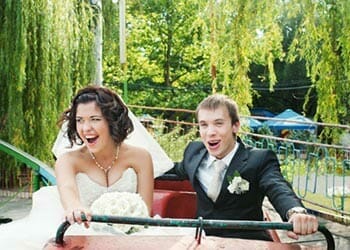 The best way to make your Disney honeymoon truly special is to fully participate. Purchase the Mickey and Minnie bride and groom ears. Although they may seem silly, the ears make your newlywed status obvious at a glance. You will be happily surprised to see how many times throughout the day you are acknowledged by other guests as well as Cast Members.

Never expect extra touches, but do not be surprised when they happen. Your ears will increase your chances of being chosen as an audience participant in shows, draw attention from Streetmosphere characters, and possibly even help you score a table at a fully booked restaurant.

Half the fun is in discovering your own magical spots and romantic moments. Some couples who honeymoon at Disney re-visit year after year for their anniversary, touring the places that meant the most at the beginning of their life together. For others, a Disney honeymoon is a one-time vacation. Either way, be sure to take time out of your touring plans to simply enjoy each other. Do not get so caught up in the must-sees that you forget to let the romance happen.

The Magic Kingdom is Walt Disney World’s flagship park. Perhaps one or both of you visited as children, or maybe it is the first visit for both. Whether you are a first time visitor or long term repeat guest, there is no denying that love is one of the main themes throughout the park. Allow yourself to enjoy the magic and romance as you begin your own “happily ever after.”

Although you will, of course, want to find your own places and activities that have relevance to the two of you, if you are a first time visitor you may wonder where to begin. Especially if your honeymoon takes places during the busy season, you may feel that the Magic Kingdom is crawling with kids, and wonder how it could possibly be romantic.

Most Romantic Places in Magic Kingdom

Here, then, in no particular order, is a list of this author’s picks as the top ten romantic places and activities of the Magic Kingdom. Use this only as a jumping off point to creating your honeymoon dreams.

Wear the silly bride and groom ears and enjoy the extra attention that you receive. Allow yourselves to run and play and act like children, and delight in making memories that will last for a lifetime. The Disney World Magic Kingdom is a wonderful place to begin your new life together.

Although the Disney World Magic Kingdom is heavily marketed to families with children, honeymooning couples should be sure to visit. Love and romance are among Disney’s biggest themes, and the Magic Kingdom is a wonderful place to fall in love all over again. Enjoy the attractions, but be sure to take time out for yourselves as well.

If you are on your honeymoon we suggest booking Orlando hotels on Disney World property . These hotels offer free shuttle service to and from all the Disney World parks every 30 minutes.